Well, our little fuel debacle is solved; I don't think I'll be troubling any more marshals for tea and petrol!

It turns out that the bit at the back of the tank near the rider's, er, tackle doesn't fill up properly with the bike on the stand; the bike needs to be horizontal with both wheels on the ground.

I got 18 litres in, Slick got 22 lites in and pronounced me too stupid to pour petrol into my own bike. He may have a point!

Fuel wise, this evening the warning light came on at Governor's Dip, which is absolutely spot on. Enough to get the job done and not too much more.

Practice conditions were pretty good - would have been well nigh perfect except for the world's biggest diesel spill, all the way from Kirk Michael to Ballaugh. I haven't seen the times yet but the team had me at 105 ish, which I'm well chuffed with.

Worth mentioning that while I was wallying about trying to avoid the spills, top lad Glyn Jones came hammering past in fine style leaving clouds of concrete dust in his wake. Alas he had to stop with a puncture in Ramsey. He'll be one to watch on race day, I reckon. My pals Carolynn Sells and Andy Cowin also stopped, Caro at the 33rd and Andy managed to stop at the Crosby pub. Hope it's nothing too serious, guys! 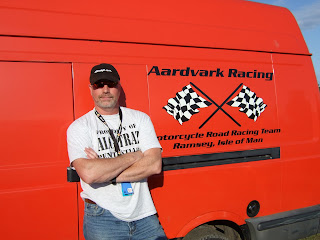 With the longer gearing the Kawasaki was flying... can't wait to see the speed trap numbers tomorrow! On the second lap I had a fantastic clear run all the way through Douglas right to Ballacraine. I've still got to work hard at keeping the gas open in places like the bottom of Bray and Crosby; there in particular it's really noticable if you lift the throttle... the revs you lose just don't come back. I'm also going to alter the suspension a bit; more low speed damping (it's wallowing a bit after bottoming out in places like Bray and Bayr Garoo) and less high speed damping (to try to keep my last few fillings in place through Glen Duff!).

best of luck to u Keith, enjoyed readin all about it, Manx Radio over the web is just not enough!Best wishes to you and all the ARA club guys (John H must now be older than Lucky Lougher...) go give it some..... The bike looks splendid. KR from Mauritius, Nick