Once again, over to the paddock and through scrutineering. I've never been scrutineered three times for the same race before! Actually, if you count the rained off Senior from last year, that's four times!

There were several delays for the weather but finally it cleared up and the tannoy announced that we'd be going for a three lap race. Conditions were great and I was really psyched up for this.. the bike was perfect, on new tyres (Rennsport SC1 inter front, SC2 dry rear) and I had Sidecar Mel and Young Woody in the pits... a crew with a LOT of years of experience between them! Janice and Becca were out marshalling as the Orange Army was a bit thin on the ground.

So we lined up for the start on the Glencrutchery Road, and the flag dropped and le leading pair were away. The next pair 10 seconds later and so on... until someone managed to blow their engine big time off the start. Big bang, huge cloud of smoke, oil everywhere... his bike kept running though and the rider kept going, spreading a nice thick trail of engine oil all the way down Bray Hill. Unbelievably, a few more pairs were given a start and to a man they all slipped and slithered sideways off the start... then reason prevailed and thye race was red flagged. We were all marshaled back into parc ferme and the bikes on the circuit were led back behind a TM.

After a long delay while a road sweeper ran back and forth over the oil spill we were off again, on a race reduced to 2 laps.

Bray was still slippy, but not bad so thanks to the sweepers!!

Other than that it was great fun, the Kawasaki ran like a storm and handled and gripped really well. Set up wise I think we were where we should have been about Wednesday of practice week!! 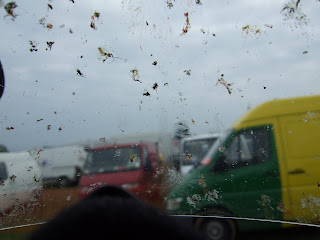 Rider's eye view! This is from the inside of my helmet, starring several dead Manx bugs. I've just cleaned it out by giving it a good soak in the bath... it was truly rank after soaking up 2 week's worth of sweat and grime. 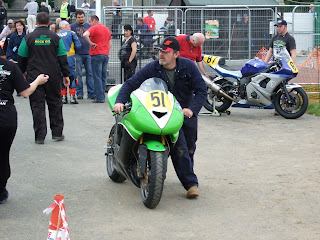 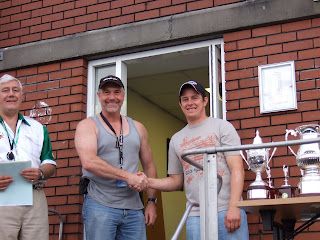 John McGuiness did the prize presentation.

Glad you got round safely.

Can you imagine what the bug population would be without all you guys on your bikes?

Well done mate!
surely something has to be done about all this stopping, they used to run em in the old days. Couldn't they station some medics around the mountain or summat so the chopper isn't needed? I think I'd prefer it wet...

Think the organisers made the best of a bad job Foz mate!