Yesterday my mate Andy Cowin stopped at Crosby, so I collected his bike in the van. Mine was already booked in for an engine change and his obviously needed looked at so I rolled up to Slick's first thing this morning, unloaded the bikes and did a bunch of preparation like removing all the bodywork.

Another pal, Callum O'Shea was also there with his lovely ZX7R which had sprung an oil leak. Slick did this first, and found the leak was from the gearbox oil seal. The chances of finding a new seal in time to go racing was nil, so Slick pulled the little spring out of the oil seal, snipped a few coils off and re-made the spring, fitted it to the seal and it worked perfectly! Very impressive!

I changed from the Junior engine (600cc) to the Senior engine (636cc) to get a couple of qualifying laps in - of course with Slick at work it was a quick and efficient job.

Here's the maestro at work! 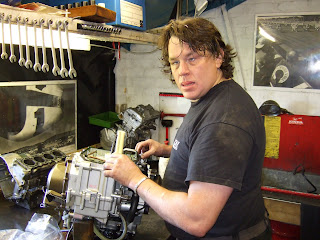 Andy's bike took a wee bit longer but it was buttoned up and tested soon enough.

Two other incidents of note; TT sidecar superstar Dave Molyneaux dropped by and gave us a load of encouragement which lit me up no end... he's a top bloke and it's fantastic to see that lads at the top of the game take time to give a bit of a boost to those of us a bit further down the pecking order... probably bird seed in my case, arf arf! Also the Snap-On van came by and I had to slither in for a bit of a lust at the lovely gear in there... one day I'll win the lottery and then, oh yes, that van will have a BIG delivery to make round my house! I also managed to blag some baseball caps for my pit crew so we're going to be *well* smart on race day.

This done we packed the bikes in the van, dropped by the house to load the rest of the gear and also picked up my assistant for the day, James "Sidecar Mel" Melvin. He's just one of the best blokes you could meet, and incidentally the Isle of Man club sidecar racing champion! We turned up in the paddock to find... this! 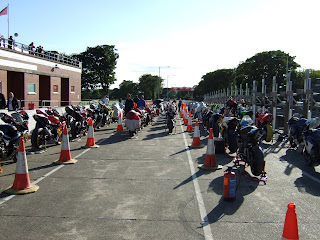 Sun! Blue skies! Dry roads! And lots of cheerful racers, of course. The classics and 400's were first out this evening, so we sat in the grandstand and watched them off then headed back to the van to get my gear on and pick up some tools, and some Go-Gels which I've been using for extra energy.

We were off about 7:15; I had Sam Dunlop and another mate Mike Noble (who's been going great guns on my old Suzuki 600) behind me so I was expecting to get caught up fairly soon! Still, I got my head down and got going. Sun glare was really bad up the Ballahutchin road but after the past few days I think I'd be a bit ungracious complaining too much about a bit of sun! I had a pretty lonely run all the way to Ramsey.. got to say the organisers have done an ace job of clearing up yesterday's diesel spill... Sam Dunlop came by at Sky Hill but I managed to tag on for quite a while and he was still in sight when he pulled of at the grandstand. The Mike showed me a front wheel at Braddan... can't have that, so I gave him a dose of Kawasaki power and put him back behind! That was just to prove a point though. I stuck a foot out and waved him through at Union Mills, that way my aging and decrepit eyeballs would have something to aim for through the sun glare up to Glen Vine!

Apart from yellow flags at the Waterworks, the rest of the lap was uneventful.

A good practice on the whole, the engine's great and the suspension tweaks me made worked well. The main problem we have now is the bike is very heavy on the steering at speed -- Quarry Bends for example is *really* hard work -- but informed opinion seems to be that's the way these bikes are. The ride height is about as high as it goes at the back, and the forks are 8mm through the yokes. Hey ho, just have to get them shoulders working!

Best wishes Keith.
Get round safely.
Tell Janice she should wear those boots to work!