Another good 'un! Henk played a blinder this morning; sorted the gearbox problem that stopped us at Ballig, *and* diagnosed 90% of the Jota's running problems as being down to a duff plug cap. Paul Dedman down the road just happened to have the right cap in stock... how lucky is that?

So; over to the paddock, unload a scroot bikes and then we were away with only a very slight delay. I got 2 uneventful laps in on the 600 at a decent pace, 107 ish, which is fine by me, then in and on to the Jota.

It pulled away nicely, it's still got a lean patch 6 1/2 to 7 1/2 but (look away now, Jota fans) it was fine up beyond that. I really hope my rev counter is over reading! Handling is, um, interesting but the wobbles and weaves seem to even out after a while... brakes are actually right good!

Second lap was about 87 mph which is well inside the qualifying time for the class. It absolutely made my day when I caught me bestest mate Chris "Fozzy" Foster on the mountain (he's on a 250 Benelli, on anything like equivalent bikes I wouldn't see him for a cloud of dust and small pebbles), and gave him a bit of a tow in my slipstream!

I'm slightly circumspect about 4 laps on that orange animal... feel like I've been beaten with steak tenderisers now. 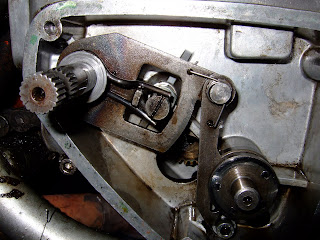 That slot headed eccentric adjuster in the middle of the pic above is what slipped and stopped us at Ballig yesterday. 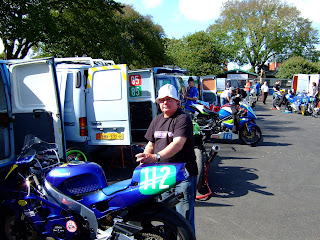 Here's Young Woody, polishing his Kawa 400. He's the Manx entry for the 2012 Nicest Bloke in the Paddock Olympics. 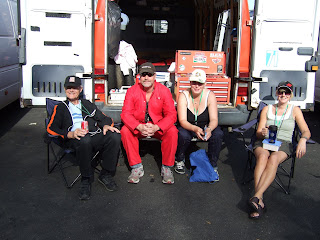 The Team! L to R, Ray Knight, TT racer (and winner) extraordinaire and basking in his reflected magnificence, me, Becca and Janice.